After a swath of plagues from God, the Egyptians finally kicked the Israelites out of Egypt.

Consecration of the Firstborn (v. 1-2)

God says to consecrate the first born (among men and beasts) to him.

I'll be honest, I didn't know what the hell "consecrate" means. I had to look it up. Apparently it is just declaring something sacred. So in this case we are saying the firstborn is the most sacred and they belong to God, or they are to be used for a holy purpose...or something like that I guess. We saw this before with Esau and Jacob, it appears that the social convention was that the older one was preferred, but in Genesis 25 God demonstrated a willingness to go against the convention and favor the younger at times. That appears to be over now, God wants to consecrate the firstborn which seems to say that the preference to the younger won't happen again. (BTW, if anyone thinks I'm way off base here let me know, I am sorta shooting from the hip on this one).


Consecrate to Me: The idea is that the firstborn was to be set apart to God, whether of man or beast - the firstborn belonged to God.

I still don't really understand what that means. So the firstborn son "belongs to God", does that mean he has work for the church? or serve the spiritual leaders? Or what? Perhaps this is obvious and I'm just being thick, but I really don't understand what is being said here.

Also, I don't understand the preferential treatment for the firstborn at all. Sure, it is understandable that the first kid would be seen differently from any subsequent children (especially if the first kid was a medical marvel), the first is always going to be different and I could imagine the average parent would treat them a bit differently. But why cement that with a declaration from God? Shouldn't the ideal be to treat all of your children equally? To put everyone on equal footing? I assume the answer to that will typically be that it was a different time back then, but if that is the answer then why is it a good idea to use this book as a guide for how to live our lives in the modern world?

They get instructions about not eating leaven for a week every year.

I'm not 100% sure what it means to say the firstborn sons must be redeemed, but verse 13 says that firstborn donkeys either need to be redeemed with a lamb or have their necks broken. Presumably the redemption of the donkey is sacrificing the lamb. So my guess is when it comes to firstborn children being redeemed, there is also a sacrifice of an animal involved.

When the people left Egypt, God didn't send them via the most direct route (through the land of the Philistines) because they might see war and return to Egypt.

Wait, what!?! They were slaves in Egypt, they would return to that voluntarily because they see war? Do they have to fight in this war if they pass through this land? I looked through other translations, and some indicate that they would have to fight to get through the land. Even still, fighting to get through a country would be different than actually taking a direct part in the war right? Especially with 600,000 men, you would think they can pass through without getting too terrible involved with the fighting.

But that's irrelevant anyway, they were cast out of Egypt so fast they had to take their bread without finishing it, and they didn't have other provisions ready. They wouldn't be allowed to return if they wanted to. It just doesn't make sense.


It would have been easy for the Israelites to think that the Via Maris was the way to go; it had good, easy roads, the shortest distance, it was a trade route so food and water could be bought. But the dangers of the way were too great, even though they could not see them. The same is true of our walk with God; a way that seems right to us may turn out to be full of danger we can't even think of.

This is an interesting way to use this passage as a connection to our lives I suppose. I remember hearing this kind of thing in church all the time. It still doesn't solve the problem of the inherent ridiculousness of the passage itself. Even Guzik points out that if they go that way the people would see war and might return to Egypt. That makes no sense.

God instead led them through wilderness toward the red sea equipped for battle.

They are avoiding the war, why are they equipped for battle? I feel like I'm missing something substantial here.

Moses brought the bones of Joseph along as was promised back when Joseph died.

I didn't remember this, but as we can see it did happen in Genesis 50, I didn't make a note of it at the time, apparently I missed this strange detail.

God led the way in the form of a pillar of cloud during the day and a pillar of fire at night so they could travel day and night.

One final thing from Guzik:


He did not take away the pillar of cloud by day or the pillar of fire by night from before the people: We often think that such miraculous assurance would make us never doubt the LORD again, but Israel certainly did - and so would we

This also reminds me of things I would hear in church all the time. They like to make these bold declarations about what everyone would do in the same situation. The huge number of people around today who don't doubt God with nowhere near this kind of evidence would seem to blow a hole in this idea. This kind of thing drives me crazy, and seems to me that it is just an attempt to explain away the illogical reaction that the Israelites will have later on.

Moral of the Story:


Trust in God, he can see dangers that we can't.

This is right from Guzik's commentary up above, furthermore, it is something I remember hearing in church and that I hear from Christians all the time. Trusting in God and letting him guide your life is a pretty common thread in a lot of Christianity as far as I can see. And honestly, it seems like it works pretty well for a lot of people, the question is how it works.

If you ask them, they would probably say that they pray and God tells them what they should do. In my opinion, they hear messages in church that generally focus on being a good person, helping their fellow man and such. They know what being a good person generally entails, and they apply those qualities to their God. Then when they do something that doesn't live up to that ideal, they think of it as God being disappointed in them or something, and use that as motivation to stop doing the bad thing. Not too different from what an atheist does, except we would just say it is our conscience or something.

"When Pharaoh let the people go, God did not lead them by way of the land of the Philistines, although that was near. For God said, "Lest the people change their minds when they see war and return to Egypt."

A Children's Book About Evolution 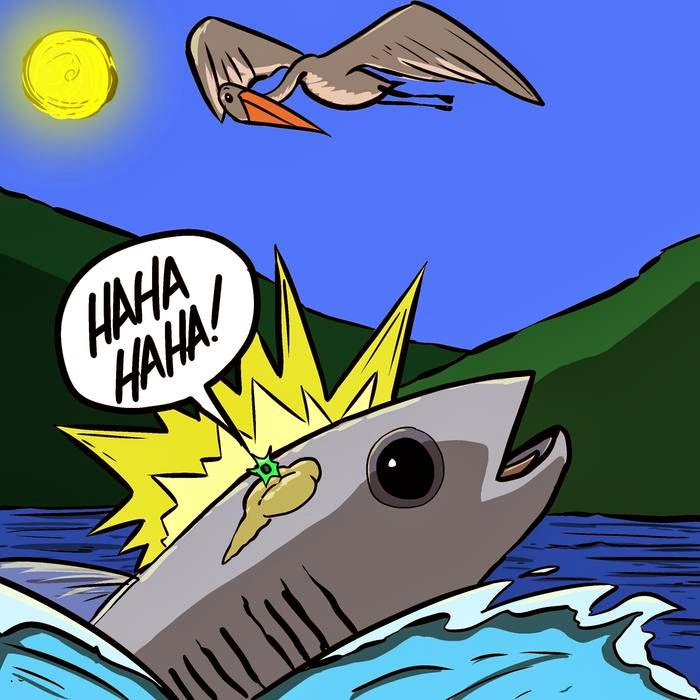 I happened to stumble upon Great Adaptations - a children's book about evolution on kickstarter and I thought it might be the kind of thing my readers would enjoy. I'm looking forward to teaching my son about all of the science stuff that I love, and this is exactly the kind of thing that will help me make it fun. It of course also reminded me of The Magic of Reality, which I am also looking forward to reading to my son (once he's moved beyond board books).

In addition to letting you guys know about this super cool upcoming book, I would like to ask you guys if you know of other books along these same lines. Please add any other suggestions to the comments and I'll edit the post.

(Also, I want to let you guys know that I have my Exodus 13 post written, I just need to record the podcast for it, but I'm sick right now and my voice is ruined. Hopefully I will be able to get it done within the week)

Edit: Additional suggestions from the comments

Steve pointed us toward a slate article which suggests Bone by Bone, Why Don't Your Eyelashes Grow?: Curious Questions Kids Ask About the Human Body, and The Evolution of Calpurnia Tate

I'm looking forward to getting all of these books, please keep the suggestions coming :)
Posted by Hausdorff at 10:32 PM 4 comments: