The Lamb was on mount Zion with the 144,000 who have the God's name on their foreheads. John heard a voice from heaven that was like thunder or rushing water. It was also like the sound of harpists playing on their harps singing a song before the throne. No one could learn the song except the 144,000. They were all virgins who "have no defiled themselves with women". They have never lied, they are pure and blameless. They have been redeemed from mankind as firstfruits for God.

Obviously there is a ton of imagery here. The voice he heard from heaven turned into harp music, I didn't quite follow that. Is the idea that it is a heavenly language and only the 144,000 can learn it? Is it a song? I don't get it. At any rate, God has taken these virgins as 'firstfruits', I don't know what that means, but I don't care for it.

An angel flew overhead who told everyone that they should fear God and worship him because the hour of his judgement is at hand.

Ruling by fear again. It really does seem to be the point of this entire book, but this verse is explicit.

This seems to just remove all personal responsibility for anything sexual. It's a variant of "the devil made me do it".

So not only will you be tortured forever, God an his angels will watch. They are apparently sick and twisted assholes. The very idea that they want to watch you be tortured is horrifying. Furthermore, what gets you into this predicament? Wearing the mark of the beast. Why would you get the mark? Well, it was necessary for commerce, and God let the beast rule the earth for 3.5 years. What is the average person supposed to do?


No one will “casually” or “accidentally” take the mark. The connection between worshipping the beast and taking the mark will be clear enough.

This is bullshit. Having the mark was necessary to do any kind of commerce. And the beast was allowed for rule for 3.5 years. If I was living during this time I would have no choice but to get the mark. I live in an apartment, I can't grow my own food, I'd starve to death. Wow, the next line in the commentary:


Although, receiving the mark may seem innocent enough to those who dwell on the earth. In their eyes it may not seem like much more that a mere pledge of allegiance and devotion to the Antichrist and his government. It was the same way in the first few centuries of Christianity, when burning a pinch of incense to an image of Caesar, and pledging “Caesar is Lord” was regarded as an innocent act of civic duty to the ancient pagans.

This once again proves my point from yesterday. Is it reasonable to punish people for their actions when they don't understand what they are doing? I argue that it is absolutely not okay to do this.

There are some angels on a cloud, some have sickles, the angel "who has authority over the fire" tells them to  harvest the earth as it is ripe. They do and they put the people into a great winepress from which blood flowed as high as a horses bridle for 1600 stadia (about 184 miles)

What. The. Fuck. This is not a God of love. Only a sadistic monster would set up a world where this happens. Yes, I know, I'm choosing this fate by not following your God who I don't believe in. It's all irrelevant. This is twisted.

The commentary writes a fair bit about this section, about how God's perfect wrath is being shown here and what not. quite frankly, I am very disgusted reading this chapter, and more so reading the commentary. I scanned it quickly, but I don't think there is anything to be gained by reading it carefully. I can totally understand why I was told not to read Revelation as a child. It's disgusting. Christians should be ashamed to have this in their holy book.

One more thing, if anyone out there is like me and has never seen a winepress, here is a picture of one (taken from rootsliving.com) 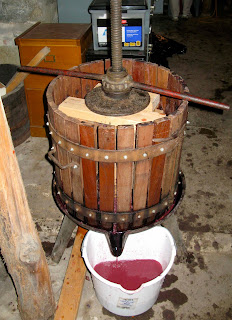 I gotta say, it seems pretty damn gruesome to me.

What are the lessons from today's reading?

Revelation 14:7 Worship God out of fear

"Fear God and give him glory, because the hour of his judgment has come"

Revelation 14:9-10 Have the mark required for commerce nets you God's wrath

"If anyone worships the beast and its image and receives a mark on his forehead or on his hand, he also will drink the wine of God's wrath"

"It is these who have not defiled themselves with women, for they are virgins..."

Revelation 14:8 You are not responsible for your sexual immorality

"Fallen, fallen is Babylon the great, she who made all nations drink the wine of the passion of her sexual immorality."

"And the winepress was trodden outside the city, and blood flowed from the winepress, as high as a horse's bridle, for 1,600 stadia. (about 184 miles)"
Posted by Hausdorff at 9:30 AM