One year ago today I started this blog, enjoy some cake while I indulge myself a little bit looking back on the last year. 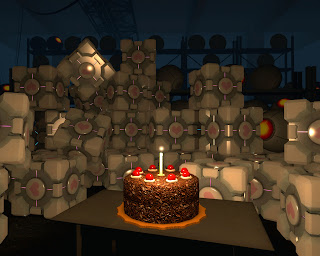 My first post was simply an explanation of why I started the blog, I basically wanted to read the bible and see what is in there for myself, cutting through what other people said about it. It was important to me to be as fair as possible, I know that my bias is not in the bible's favor, so I try to give it the benefit of the doubt whenever I can. I think I generally succeed in this, although I'm sure I've been overly harsh at times.

My first bible post was on the same day. I've had fun looking back at this, it's interesting to see how I have tweaked the formatting. One of the simplest ones that took me way too long to think of was to put a link to the verses in question after each section.

One of the things that I would like to point out on that first bible post is there are comments from JKerber. Huge thanks to him from reading the blog and keeping up with it from the very beginning. If I hadn't known that someone was reading it and even providing good discussion, I might have lost interest in the first few months. The continued existence of the blog is in no small part due to him. As long as I'm in this area, I would also like to thank Grundy and Reason Being, who found the blog fairly early on and became regular commenters ever since. Again, knowing you guys were reading gave me a lot of motivation, and still does today.

Somewhere along the way I decided that instead of just reading it myself, and criticizing the things I don't like, I would also find some bible commentaries from Christians and see if they have any answers for what I have come across. This has probably been the best addition to the blog, as it gives a perspective that is very difficult for me to give. There have definitely been a few times where I have thought something was crazy, but the Christian commentary provided a reasonable explanation that I hadn't thought of. Although I would say much more often than that, they don't provide an answer, or worse yet prove my point while trying to argue theirs. It's also...interesting...how they justify some of the terrible things I come across.

Apart from improving the formatting, I've also done some expanding. The first was about a month and a half in when I did a weekend post on apologetics, which quickly just turned into posting whatever I feel like on the weekend. I really like this way this turned out, I get to post often enough that I am able to say everything I really want to say, but it's not so often that I have trouble coming up with content.

Of course, somewhere along the way I started the podcast. The idea for the podcast started with me reading the bible out loud to myself as I was preparing the blog one day. I came across something objectionable and was ranting to myself about it and the thought crossed my mind that I could record it. I quickly dismissed the idea figuring that no one would be interested in that, but shortly thereafter I stumbled across thomas and the bible, given that I enjoyed his podcast, I figured other people might like a similar type thing from me.

And recently, I started drawing comics to go along with the bible reading and a few days ago it became it's own separate thing. As with pretty much everything else I have done on this blog. It basically started as an afterthought which I had fun with and let it grow naturally.

Thanks everyone for reading, and for indulging me in this (longer than expected) post.
Posted by Hausdorff at 9:30 AM