I Can Cherry Pick Your Bible But You Can't 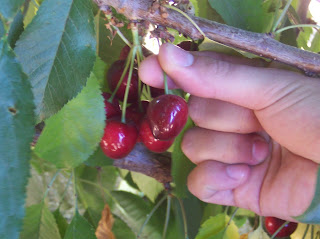 It's no secret the Christians do a lot of cherry picking of the bible. They will focus on verses that support their ideas and completely ignore verses that go against them. Take for example the current gay marriage debate going on in this country. Christians will often cite bible verses to support their argument that being gay is bad, but will ignore the fact that nearby verses also prohibit eating shellfish.

Christians don't tend to like having these facts pointed out to them, when confronted they will often try to turn the tables and point out that atheists focus on all of the negative things in the bible. The claim is that we have no high ground here, we cherry pick just as badly as they do. The problem is, we aren't making symmetric claims.

Many Christians claim that the bible is inerrant, that it is the perfect word of god and that it is the source of all morality. These are very strong claims, and really, a single counterexample creates big problems. Ignoring parts of the bible which contradict these claims is unacceptable.

Atheists on the other hand don't claim that the bible is 100% bad. If we did, our cherry picking would be a problem as well as we would be ignoring the evidence against our claim. However, our claims are generally that the bible is not perfect and that the God depicted in the bible is not a strong moral character. To support these claim it is not necessary to show that good stuff is absent, we merely need to show that bad stuff is present. That is why we will often cherry pick the bad items, because all we need to do to prove our point is to show such items exist.

Posted by Hausdorff at 9:30 AM